Things to do in Knysna

Knysna, which is rightly considered the “Pearl of the Garden Route”, became part of the Garden Route National Park in 2009, the first park to encompass nature resorts as well as inhabited urban areas – a groundbreaking new concept in nature conservation. Situated at the shores of one of the largest lagoons in South Africa, Knysna is surrounded by indigenous forests, quiet lakes and magnificent, endless beaches – a natural paradise without comparison. Little wonder then that Knysna accommodation is the choice of many Garden Route visitors!

Knysna with its approx. 55.000 inhabitants has a mediterranean feel, with plenty of restaurants, boutiques, cafés and galleries. The city center can safely be explored on foot.

From Knysna easy day trips will take you along the entire Garden Route up to Storms River in the east. If you want to enjoy some hot inland climate simply cross over the Outeniquas and you will find yourself in the Little Karroo – we’ll be happy to give you some special tips and point out hidden routes off the beaten track. Things to do in Knysna are plentiful – here are just some of them: 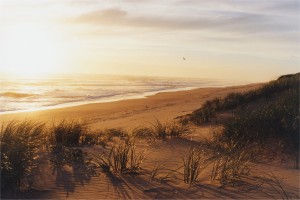 The Indian Ocean at Knysna is considerably warmer than the oceans around Cape Town. Our nearest beach at Brenton-on-Sea is about 10km away and easily reached on Knysna’s new lagoonside road.

Around Knysna three types of beaches can be found: in the west long sandy beaches ideal for bathing, surfing and beach walks; close to the Knysna Heads and at the opening of the lagoon smaller beaches among the rocks, ideal for snorkeling and diving; in the east toward Harkerville and Plettenberg Bay steep cliffs with magnificent hiking trails that offer spectacular vistas onto the wild ocean. 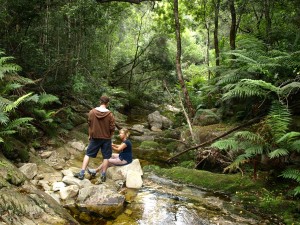 The dense local forests are unique among Knysna’s attractions. Knysna’s hinterland stretches north to the foothills of the Outeniqua mountains; this is where you will find some of the largest remaining indigenous forests in Southern Africa. To this day they are inhabited by wild elephants – though how many there still remain is a hotly disputed question since they are almost impossible to spot in the dense foliage. But one thing is sure: in the 18th and 19th century a couple of hundred of them roamed the area. Far from today’s image of the gentle giants they were considered extremely dangerous animals by the local woodcutters who worked in the Knysna forests in those days and suffered unimaginable hardships to eek out an existence. To call an elephant by its name was considered too dangerous and asking for trouble, so one rather referred to them as ‘Old Bigfoot’. The story of the Knysna woodcutters and the elephants is captured in Dalene Matthee’s “Circles in the Forest”. A monument to this South African poet can nowadays be found at the start of a 9 km hiking trail in the Homtini Forest, right under a magnificent 900 year yellowwood tree.

All indigenous forests have nowadays been proclaimed nature conservation areas and yellowwoods and other rare trees are no longer used for industrial timber. Hikers can explore these mystical forests on many trails, including the spectacular 9-day Outeniqua Hiking Trail. 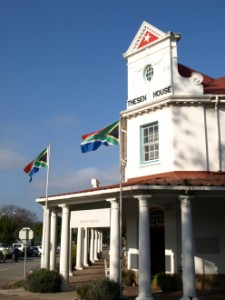 Knysna’s name is probably derived from the Khoi word “Xthuys Xna”, meaning “the place where the wood is”, a reference to the forests as well as to the Knysna River which winds its way through the impenetrable wilderness and between steep gorges before entering the lagoon. The first European settlers of the 18th century were attracted by the natural beauty of the place. In 1770 Stephanus Terblans acquired “Melkhoutkraal”, a huge farm which surrounded the entire lagoon in those days. After Terblans’ death the property changed hands a number of times before it was bought in 1804 by the man who is nowadays considered the founder of Knysna, George Rex – a flamboyant British colonial officer who some still believe to be related to British Royalty… The Knysna settlement began to prosper when the Norwegian Thesen family, breaking off their journey to Australia upon realizing the area’s huge potential in natural timber, started a saw mill on Thesen Island. This marked the beginning of the timber trade which eventually necessitated the building of a harbour, even though the passage through the Knysna Heads proved to be extremely dangerous. 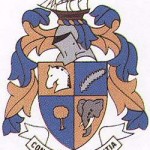 Knysna was officially established as a settlement in 1825 and its old coat of arms points to the historical foundation, displaying a ship, a logging horse, a saw blade, a tree and an elephant. In 1851 Knysna was proclaimed a magistrate, in 1831 a town.

Knysna’s harbour, which had played an important role for its economical growth, lasted until 1954 when it was eventually de-proclaimed, the railway to George now having taken over as the primary means of transport. The Knysna – George route for the Outeniqua Choe-Choe steam train was serviced until 2008 when a huge flood damaged the tracks beyond repair.

Steam train enthusiasts have been waiting for a wealthy investor ever since, hoping that the spectacular route across the lakes and along the shores may one day be travelled by the historical steam trains again. Today Knysna is one of the most sought after tourist destinations and attracts visitors from all over the world. 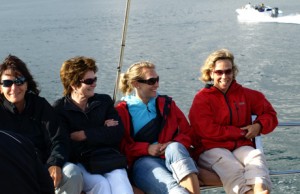 During the Oyster Festival held annually from the first to the second weekend in July Knysna turns into a Mekka for cyclists and marathon runners. Some 10.000 participants tackle the half and full marathons through the Knysna forests and over 3500 cyclists partake in one or more of the numerous street and off-road races. Another of the Knysna attractions is the annual Karoo-to-Coast 100km Mountain Bike Race which takes place in September. For the less sporty there are some serious culinary attractions to negotiate: the annual oyster cooking competition takes place during this week as well, where professional as well as hobby chefs compete for the best oyster recipe.

However, if you prefer to take things really easy then a sunset cruise on the Knysna Lagoon with oysters and champagne might be just the right choice – book a trip aboard the beautiful owner-built 50 feet Outeniqua and enjoy the views onto Knysna and the mountains in the background from the waters. 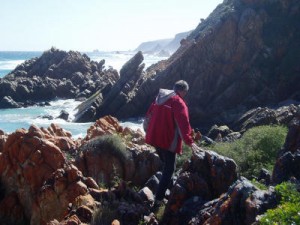 The indigenous forests behind Knysna, the cliffs along the rugged eastern coast line and the sandy beaches to the west can be explored along many hiking trails of different grades of difficulty. Whether you just want to enjoy an easy walk or prefer a serious hike and scramble – there are many options at hand.

Some 90 km to the east lies the Tsitsikamma National Park, and closer by you will find attractions such as the Knysna Elephant Park, Monkeyland or Birds of Eden and other private parks – see our Info&Links page for more details. 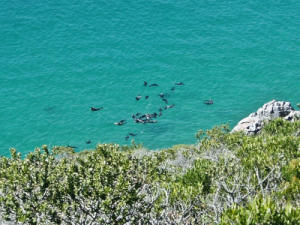 The Southern Right Wales come to our shores in winter and may be spotted from about May to end of October. Dolphins and seals of course are year-round attractions and can often be seen, particularly at Robben Island peninsula near Plettenberg Bay, some 35 km to the east.

A number of companies offer boat trips for whale and seal watching; please consult our Info&Links page for more details. 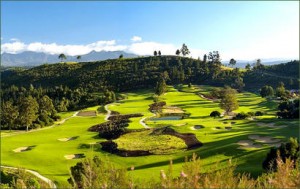 More down to earth, but no less liked is Knysna’s old municipal golf course on George Rex Drive, the lagoon road to the Knysna Heads. Other golf courses can be found in Plettenberg Bay (35km), George (60km), Mossel Bay and Oudtshoorn (100km)